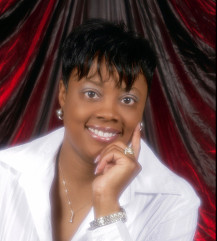 Minister Loretta Ann Holmes is a native of Gaffney, SC. She is married to Bryant Holmes and they are the proud parents of a son, Jeremiah O’Bryant. Minister Holmes is a product of the Cherokee County School System. Upon graduating from Gaffney High School, she attended Winthrop University in Rock Hill, SC where she obtained a Bachelor of Science degree in Elementary Education. She furthered her education receiving a Master of Education degree from Southern Wesleyan University in Central, SC and a Master of Arts in School Administration and Supervision from Gardner-Webb University in Boiling Springs, NC. Minister Holmes is currently employed by Cherokee County Schools as the principal of Luther Vaughan Elementary. Minister Holmes has received numerous degrees and accomplishments. However, none of these things can be compared with the ultimate gift that she has received and that is the gift of salvation. She is a firm believer in the Word of God and strives daily to live by the Word.

Minister Holmes joined the Concord Baptist Church in Gaffney, SC in October 2002 under the leadership of Dr. Michael A. Bridges. She accepted the call to preach the gospel in October 2011. She preached her initial sermon on December 8, 2013 and was licensed as a minister. Currently, she serves as a Sunday School teacher, an adviser of the Young Adult Ministry, and is the Praise & Worship Team Leader.

Minister Holmes has endured many situations that should have shaken her faith; instead, she uses her life experiences as a testimony to shed light in the lives of others. The scripture that she holds dear to her heart is Jeremiah 29:11 – “For I know the plans I have for you,” declares the LORD, “plans to prosper you and not to harm you, plans to give you hope and a future.” No matter what happens in her life, she realizes that it has to be a part of God’s plan. Her prayer is that God will continue to use her to transform the lives of His people and her light shines bright for the Kingdom of God.