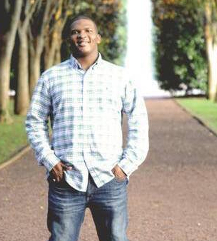 Minister Terrance R. Gist is a native of Spartanburg, SC. He is the son of Ronald Gist and the late Phylis Vanlue. He is the first born child and he has 4 other siblings.

Minister Gist is a 2012 graduate of Dorman High School. After high school, he later matriculated at Greenville Technical College where he received an Associate of Arts degree in December 2015. In May 2019, he graduated from Liberty University Online with a Bachelor of Science in Religion. He is currently employed by Policygenius Inc. an online as a Sales Operations Associate, and is the owner of Goshen Properties LLC.

In 2006, Minister Gist was baptized and joined Concord Baptist Church where he has served in various ministries. In 2011, Minister Gist acknowledged the call to preach the gospel. After years of studying diligently in preparation for the ministry, on April 19th, 2015, he preached his initial sermon under the leadership of his pastor, the Reverend Dr. Michael A. Bridges. Currently, he serves as an Associate Minister assisting his pastor and a Sunday school teacher for the pre-teens class at Concord.

Minister Gist is married to the love of his life, the former Brittany Black, and they have two daughters, Camara and Gabrielle.

Minister Gist’s primary focus in life is to lead as many people to Christ one by one. He stands firmly on his favorite scripture, Proverbs 3:5-6, which says,” Trust in the Lord with all thine heart: and lean not unto thine own understanding. In all thy ways acknowledge him and he shall direct thy paths.” His prayer is that God continues to use him to reach lost souls and elevate him in spreading the gospel for such a time as this.